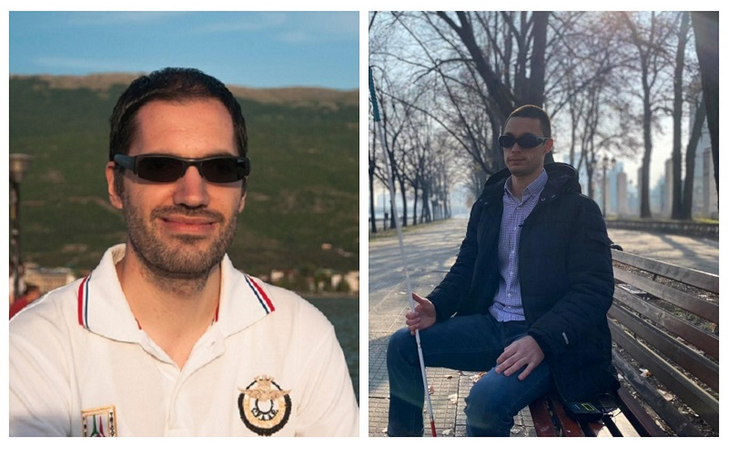 The Kiko project got off the ground, and completed successfully due in large part to the commitment and work of two blind screen-reader users in North Macedonia: Ertay Shashko and Kristijan Lazarev.

We worked with them during the building and testing of Kiko, and we are pleased to see them get recognized in the North Macedonian press.

The full article, in the Macedonian language, is on the Fakluteti.mk website. Here is an excerpt, translated for us by Google:

A tool that will help over 10 thousand blind people

With the combination of screen reader and computer voice, blind people can actively use most social networks.
According to Christian, the software has enormous potential to help and facilitate the lives of nearly 10,000 blind and visually impaired people in the country, tens of thousands of people with dyslexia and learning disabilities, and several thousand people (children and adults) with cerebral palsy. paralysis and communication problems, thousands of elderly people suffering from vision loss due to myopia, hundreds of people who have had surgery to remove their vocal cords or have lost their voice temporarily or permanently.

– The potential is huge and in the next 5 to 10 years, as long as this software is planned to be operational, the lives of more than half a million people can be changed for the better in our country alone. When the Albanian computer voice Hana is added, which will be ready in two to three months, the people from Albania and Kosovo, who also do not have such a voice, will be added, and that number will increase to several million potential users. Now the question of training and implementation remains, putting this voice into operation. How much that will happen does not depend entirely on us, the team that made it, but we will work on that as well – he points out.

Motivation for teachers as well

Ertay appeals to the parents of blind children from a young age to introduce them to a computer or to turn to the Union of the Blind, where they can be helped with the first steps.

– Informatics teachers should also motivate and guide the blind and visually impaired, because the love for a profession appears in those teenage years. “They need to get to know the audio readers,” he said.
According to him, screen readers allow blind people to use a computer or telephone, just like everyone else.

– The main difference is that instead of using a mouse to click, blind people use the keyboard all the time. There are a number of keyboard shortcuts that are memorized over time, so blind people can use their computer or phone with the same efficiency and speed as other people watching. The same goes for phones, when the screen reader is turned on, the touch commands change. For example, without a screen reader on, you press an application once to open it, and with a screen reader, touching the screen first focuses and pronounces the applications, and to open the application, you press twice – explains Ertaj.